Why I love Afrezza…Control- No more Neverending Rollercoaster Rides! 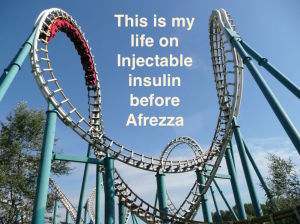 Last year when I visited Six Flags Over Georgia I was reminded of how I managed my insulin needs before Afrezza. The park is truly a blast, but life as a diabetic is very much like riding in the Dodge City bumper cars all day long that don’t steer and then banging into curbs or like riding on the giant Goliath rollercoaster feeling nauseous from all the ups and downs.  Afrezza for me was the overwhelming answer to this “amusement park” problem in managing my diabetes.

Many folks on twitter are relaying to me that the “control” issues that we all experienced on our old insulins  are no longer common since taking Afrezza. People continue to ask me, “ How can Afrezza possibly work like you describe? How come you don’t have to exactly titrate your dose like we do with our insulin pens to match up carbs? Ok—here you all go—it’s  Afrezza that works faster than anything else, and provides that complete “control” and freedom from the daily diabetes rollercoaster. I mean how else could anyone explain Adam Lasher (@AdamLasher) making a video after only 36 hours on Afrezza, and saying I’m done with this old nonsense that I’ve used since 3rd grade (and it wasn’t about the needle, it was about the CONTROL-being able to correct his blood sugars in minutes and not hours)! I encourage everyone to not only watch his video, but to share it with other diabetics they know. Adam is the real deal and the true American Idol for all diabetics in my opinion.

Another thing I’m hearing people tell me is that they won’t have the same results as I did (so not true, and the common thread here is that none of them have given Afrezza a try), and then guess what— afterwards, usually within a day or two of getting their prescription—they say I’m never, ever going back to what I was doing! For them, the “panic moment” is no longer found at the top or bottom of the daily diabetic rollercoaster, it’s the first time when they realize they don’t have any more Afrezza cartridges left. (Incidentally, Adam Lasher did mention to me it happened to him when he ran out Afrezza right before his performance in Laguna Beach last week and that he never wants to go through that ever again—and that was after only one sample box of Afrezza). That’s all it takes folks. So when you hear that Sanofi underestimated the demand for the number of sample boxes needed for doctors and had to order more, they are also suggesting they may have underestimated how great Afrezza is going to be accepted in the diabetes community looking out for the next year or so.  Afrezza is life-changing and every sample box is potentially another improved life. The new success stories I’m seeing like Adam, Eric, and Brian will encourage countless others.

With Afrezza you have Power steering and not “bumper car” steering. Whenever you feel like correcting a “high”, you can just do it, right there where you are (just watch Eric Fenar skiing, eating, at the beach, sports event, around the house, etc.) and you don’t have to worry and “wait in line” for an hour just to get on the ride, and then another couple hours before you can get off the ride to find out if you were successful. I find it interesting that some people watch everything they eat down to the gram using extensive calculations, and spend all their time managing their diabetes and meanwhile if they were on Afrezza most (with time, practice and experience)  could likely “live” without all that extra work. Well, that is at least how I see it. Now I am not suggesting that people should run out and not count carbs anymore if they take Afrezza but so far I have not. Lately, my average daily blood sugars are running between 94 to 105. That equals an A1C of 4.9 to 5.45. If I have not counted carbs or pre-planned my meal insulin needs in advance and can still have fairly stellar results, then why should I even bother counting carbs? My next blog post will test the limits of this theory–Al Mann’s assertion all along–I will take Afrezza and not eat to see exactly what happens!

Afrezza is actually taken at the start of your meal, and not in advance, so largely all that “prep” work” is eliminated for me. Fact is, once I injected myself before a meal and fell asleep on the couch waiting for it to be ready and I woke up barely able to move, and had to crawl on my hands and knees to the kitchen and drink a 2 liter Sprite to save my life. I thought I was going to die, and I am so thankful that this has largely been eliminated with Afrezza because you don’t have to manage around slower insulins that take too long to peak and linger around too many hours causing hypoglycemia when you least expect it. Moreover, I am able to do all this because of the way Afrezza interacts with the liver and not because it is inhaled. Plainly, Afrezza mimics the pancreas, and everything is now working as if I had a working pancreas. Thus, logically it provides the “control” over our blood sugars that was never possible before. Seeing all the unbelievable “flat lines” on the CGM’s after big carb meals being regularly posted on twitter is absolute proof of this phenomenon.

Someone recently posted a video online called “Go live life” and I think it’s a good message. Research I’ve seen says diabetics live on average 10 years less than the general population so we certainly don’t have the time to waste while waiting for a cure.

An amusement park like Six Flags is a terrific place to visit for a day. It’s not a place where anyone should be forced to live 24/7. I wish all fellow diabetics amazing, consistent and predictable control—Afrezza was the solution for me.

"Someday there will be millions and millions of Afrezza users."