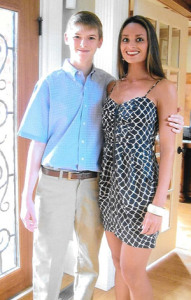 Hi, I am sixteen years old and the son of type one diabetic Sam Finta. I write this to explain how Afrezza changed our lives.
Before Afrezza, diabetes was a frequent issue in our lives. Whether it was worrying about his safety when I am not with him, or making sure he has some source of sugar when we go somewhere in case of emergencies, it was a commonly spoken about topic. My dad used to, what I call, “freak out” sometimes. This is when his blood sugar runs too low and he begins to act unnatural due to his need for sugar. This was very scary for me and it happened a good amount of time when he was not on Afrezza.

During my dad’s time using Afrezza, everything changed. Diabetes was no longer a nuisance, it was not talked about at home, and it was almost as if his case of diabetes had disappeared from my life. I did not worry about him when I was not with him. It was a relief and neither of us felt stressed out any more about his case of diabetes. Not to mention the way you inhale insulin made my dad happier because he did not have to give himself shots every day. We also no longer had to calculate beforehand how long before his insulin would kick in so what he should eat before insulin and after and how much to take. From what I understand, Afrezza acts much quicker than normal insulin and this was very noticeable throughout watching my dad on this trial.

Now that my dad is back to normal insulin, all the previous problems are frequent issues in our lives again. I hope that my dad will be able to take Afrezza again as it makes our lives less stressful and I do not have to worry about him as much.

Six years is a long time to experience anything life threatening. Most of us live life with the luxury of not being concerned with our health, at least not in terms of enduring a chronic disease that has no cure or that is life threatening. I’ve witnessed what the life of a Type I Diabetic is like and how interruptive it can be to daily life.

Most don’t think of Type I Diabetes as a disease that is life threatening, as I wouldn’t have before observing the episodes that I have. Not only is there that risk, but Type I Diabetes also interferes with his living a normal daily life. For Sam, it means checking his blood sugar every morning, every time he eats, each time he exercises, and before he goes to bed at night. Upon learning whether his blood sugar is normal, he also has to determine whether he needs to eat or take insulin in order to normalize his sugar levels, knowing that the insulin takes several hours to fully take affect and could potentially put him at risk of running low several hours later. All of these things consume a large part of his each and every day.

Over the years, I have witnessed numerous accounts of Sam suffering from a “low”. Most often it was a matter of recognizing his symptoms and finding the fastest source of sugar for him to consume. The symptoms would often wake him up at night and put him into a frantic panic for food or sugar. During the day, he’d show signs of confusion and disorientation that mimicked drunkenness and often left him embarrassed upon hearing of the way he acted during these instances. Of course, he was blacked out all of these times and has no recollection of what happened. The times he experienced lows were the only times in six years that I saw him flustered or not completely in control of his words and actions.

The scariest of times were those when we recognized that he was having a “low”, but didn’t have access to an emergency food source to counteract it. This happened once in traffic, when Sam became disoriented and began redirecting us in aimless circles, unknowingly. It also happened on vacation on the beach, when I had to run down the beach in search of someone with a food or beverage that could bring his sugar back up. The worst occasion I witnessed happened in 2012, when I awoke to what I thought was Sam talking and moving in his sleep. Fortunately, I quickly realized he was having a seizure due to low blood sugar. He was completely unresponsive and convulsive, so I called 911 immediately. During the time between the call and the ambulance’s arrival, Sam had thrown himself out of bed and repeatedly slammed his head against the floor until his forehead split open. Shortly after, the convulsions stopped and he had a blank stare, as if the life in his eyes had disappeared. I knew then, that he was slipping into the next stage of a diabetic low, a coma. Once the paramedics arrived, they gave him a glucose shot to normalize his sugar levels. It took minutes before he showed any signs of starting to come back into consciousness. Once again, he had no recollection of what had happened or why he was bleeding from his head or any idea that he was on his way to slipping into a coma. This was one of the most terrifying experiences of my life. I thought I was going to lose him right in front of me and there was nothing more that I could do to help him.

In May of 2012, Sam was one of the few participants in the world to be randomly selected to join the controlled trial of the inhaled insulin, Afrezza. During this six month term, Afrezza changed Sam’s life and gave him hope to live like a non-diabetic again. Because of the quick absorption of this insulin, his sugar levels were well controlled within thirty minutes of inhaling it. There was no concern from one meal to the next as to how low his sugar would drop or if he would need to eat again. Gone were the days of lugging around “emergency candy”, just in case. Furthermore, we could go to sleep at night without the worry that he would wake up with low sugar, or worse, in a state of seizure or coma. For the first time since his diagnosis, Sam was able to live life as a non-diabetic. To go from being in a perpetual state of fear that his blood sugar could push into dangerous levels hours following his insulin shots to knowing that thirty minutes after inhalation of Afrezza, he was in the safe zone, was truly life changing for both of us. The stress of the disease was lifted.
Afrezza is the closest thing to a cure since he was diagnosed. The new found hope he had was comforting to me, to his son, and to his friends and family, who are aware of the danger of the disease. His son no longer had to endure the scary episodes of Sam becoming disoriented and acting out of character. Not only was Sam excited and hopeful for himself, but he was equally excited to bring awareness of the drug to help others dealing with the same struggles, and even more so to parents who have children with Type I Diabetes and can’t sleep at night for fear of what they might awake to. With Afrezza, Type I Diabetes was no longer a sort of handicap, but a livable disease, without the stress of being life threatening.

Sam has survived the odds, as he has had at least a half a dozen close calls that have proven to be near fatal. Some haven’t been as lucky as Sam and this very drug could have been their saving grace. I am as thankful for Afrezza as Sam is, as I had a peace of mind that he was safe when I was not with him. Everyone in Sam’s life was put at ease when he was on Afrezza. Afrezza insulin is a life changing drug and life saving for so many people and families who have lived in fear and endured this daily battle with loved ones for so many years.

Did you miss the Interview between Sam Finta, "AfrezzaUser" and Emily Coles, Head of Communities at Diabetes Hands Foundation which was held on
Thursday, May 7, 2015